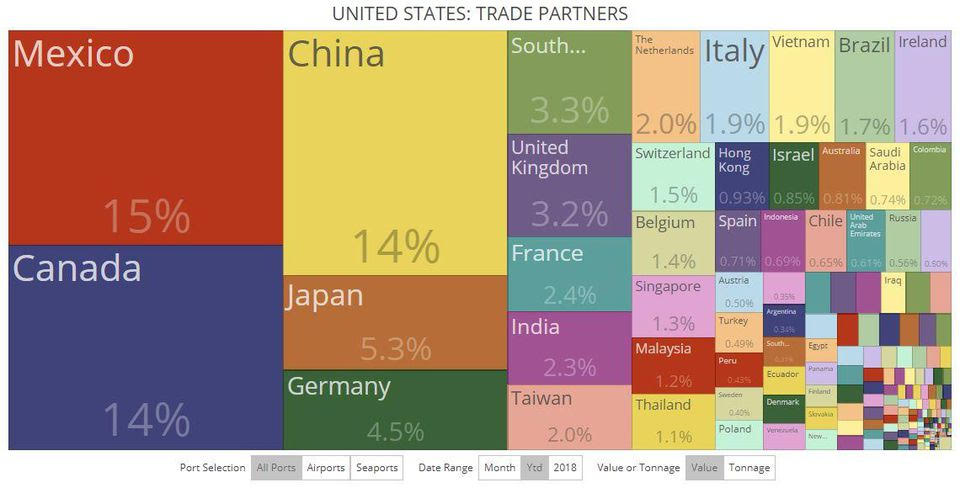 Mexico is the United States’ top trade partner. At least for the moment.

This realignment shines a slightly brighter light on the essentially dormant U.S.-Mexico-Canada Agreement, which House Speaker Nancy Pelosi has bottled up in Congress, and President Trump’s since-retracted threat to close the U.S.-Mexico border over illegal immigration and drug issues.

Granted, the data is only through February. But it is the most recent data available from the U.S. Census Bureau, which is still playing catch-up from the month-long government shutdown.

These top three trade partners routinely account for about 45% of all U.S. trade with the world, with the remaining 55% spread among more than 200 nations.

On an annual basis, China has ranked as the United States’ top trade partner the last four years, since passing Canada in 2015. The change occurred not because of a glut of inexpensive imports from China but because of the steep decline in the price of oil — Canada is far and away the largest supplier of foreign oil. Prior to 2015, Canada had ranked as the United States’ top trade partner for decades. Until 2005, Mexico was the No. 2-ranked trade partner, behind Canada. In 2006, China first passed Mexico.

So, even if it lasts only a month or two, Mexico can now lay claim to having ranked as the United States’ top trade partner.

Here’s a little more detail on what happening with each of the three.

U.S. exports to Mexico have increased slightly, up 0.23%, while imports from Mexico increased 5.87%. On the export side, the drag was with the top U.S. export, gasoline and other fuels, which declined 4.73%. On the import side, the top import, motor vehicles, increased 13.93%.

While the border crossing at Laredo in Texas routinely accounts for 37% of all U.S.-Mexico trade, the bigger gains in 2019 have been Otay Mesa, south of San Diego, where trade is up 10.85% and Santa Teresa, New Mexico, where trade is up 27.45%. All of these gateways routinely do more than 95% of their trade with Mexico, not surprisingly.

On the U.S. export side of the ledger, well-publicized soybeans are off 39.65%, entangled in the U.S.-China trade war, and motor vehicles are down 7.07%, somewhat ensnared in the U.S.-imposed steel tariffs. On the other side of the ledger, U.S. imports of cell phones and related equipment are off a somewhat stunning 29.70%, from $10.98 billion to $7.72 billion. Computers and monitors dropped 14.07% and furniture declined 18.91%.

What’s likely to happen from here?

A deal to end the U.S.-China trade war is expected soon, or at least that’s the word from the U.S. side. But sometimes this administration can get ahead of its skis. So let’s see.

With Canada, even a slight bump in oil prices — such as one caused by the Trump Administration’s decision to end waivers on countries buying Iranian oil — could boost its U.S. trade and propel it past Mexico. It is, after all, the top supplier of foreign oil to the United States.