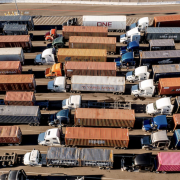 The pandemic caught Stanley Black & Decker midway through an overhaul of its 18-country supply chain.

Executives at the toolmaker’s New Britain, Conn., headquarters already had shifted most production of heavy-duty industrial products closer to customers in the United States and Europe. But efforts to do the same with Stanley’s popular hand tools were unfinished when the coronavirus pandemic began disrupting global commerce.

This year, as ports grew clogged, Stanley saw its freight bills jump by a factor of seven, endured months-long shipping delays and scrambled to obtain computer chips for its power drills, saws and sanders. Earlier this month, the company had shipping containers stranded on 50 ships anchored off the Southern California coast.

Spurred by the pandemic, Stanley is moving on multiple fronts to strengthen its supply lines. Executives in charge of its tools business accelerated plans for two new factories in Mexico and one in Fort Worth. They locked in future supplies of lithium-ion batteries for power tools by funding dedicated production capacity at U.S. and Taiwanese suppliers and stockpiled an extra $1 billion in products.

“With the pandemic, it really has radically shaken the supply chain,” said Don Allan, Stanley’s chief financial officer. “It does drive home the importance of our strategy of getting closer to where we sell. The more you can minimize the amount of time your product is in transit, the better off you’re going to be.”

The toolmaker’s strategy illustrates how corporations are responding to the pandemic with some of the most consequential supply line makeovers since the onset of globalized production roughly three decades ago.

Many companies are using a variety of temporary solutions to try to navigate the current crisis. Eaton, an industrial manufacturer, dispatched its own experts to work alongside suppliers. Colgate Palmolive used more costly airfreight to ship its toothpaste and toothbrushes. And, Walmart chartered its own ships to circumvent backlogs.

As the disruptions persist, executives are embracing more lasting measures, moving production to new suppliers or different countries and relaxing their traditional fixation with low costs. But what they are not doing is equally important: There is no sign of any wholesale return of jobs to the United States. U.S. corporations remain believers in globalization, importing more than $2 trillion of industrial parts, raw materials and consumer goods each year from suppliers they regard as best suited to produce them.

The shifts that are occurring cap four years of supply chain volatility, including the Trump administration’s trade wars, a once-in-a-century health crisis and increasingly frequent natural disasters on multiple continents.

“Supply chains used to be sort of very immobile, black boxes, quite set in stone,” said Sebastien Breteau, chief executive of QIMA, which conducts worldwide factory inspections and audits for major retailers. “We’ve seen the supply chain become a lot more dynamic. And we see people having to adapt almost in real time.”

In some cases, manufacturers such as General Electric are even redesigning their products to eliminate dependence upon vulnerable sources of parts and materials. At Honeywell, where “tiger teams” track supply shortfalls on a daily basis, engineers have tweaked the company’s sensors and fire control systems to use more readily available computer chipsets, executives said on a recent earnings call.

To insulate itself against future supply surprises, Honeywell is developing a dual-source strategy for some products and signing longer-term deals with key suppliers.

“We’re going to have to deal with some supply chain challenges that are here, they’re real, they’re probably understated in the market,” Darius Adamczyk, Honeywell’s CEO, said on an earnings call last month. “It’s only recently that it’s been realized how severe they are.”

Soaring freight costs and unpredictable deliveries undermine the logic of ocean-spanning supply lines as well as the dominant production theory of the past generation, which called for parts to arrive at factories “just in time” to be assembled into finished goods.

Amid congested ports, trucker shortages and rail yard delays, it now takes Stanley almost 90 days to get its products from factories in China to U.S. stores — three times as long as before covid-19, Allan said.

Bringing a standard shipping container full of clothes, toys, furniture or industrial components from China to Los Angeles now costs $18,730, more than 13 times the pre-pandemic price, according to the Freightos index. Long-distance trucking costs have risen 27 percent over the same period, the U.S. Bureau of Labor Statistics said

“Manufacturers who have complex products, they are scrambling for parts. They are scouring distributors. They are escalating with their suppliers every day, saying ‘I need more of these,’ ” said Willy Shih, a professor at Harvard Business School. “There is also a lot more stockpiling of parts, more ‘just in case, I’m going to carry a little more inventory.’ But when people order extra for ‘just in case,’ it’s actually making the shortages worse.”

Breaking a globe-circling supply chain into regional networks is emerging as a popular response. Construction companies on both sides of the U.S.-Mexico border expect to benefit from this trend of “near shoring” production with orders for new factories or warehouses.

“We think that’s going to be a nice little bump for us, probably late ‘22, early ‘23,” Joseph Cutillo, CEO of Sterling Construction in Houston, told investors earlier this month.

Likewise, Cemex, the Mexican construction giant, said in July that it was capitalizing on the shift of manufacturing and industrial capacity from China to Mexico. The cement and building products producer already is benefiting from the construction of new warehouses near the U.S. border, executives said.

Today, about 40 percent of the Stanley tools purchased by Americans are made in the United States or Mexico. Allan wants to get that figure closer to 70 percent over the next two years.

But bringing work back from overseas doesn’t mean many jobs will come along. The new Fort Worth plant is “virtually 100 percent automated manufacturing,” needing just a couple hundred workers rather than the 1,000 required in an Asian facility, Allan said.

Few companies are abandoning globalized supply channels entirely or shifting a significant number of jobs back to the United States. The volume of merchandise trade exceeds the pre-pandemic peak and is expected to grow by almost 11 percent this year, according to the World Trade Organization.

Labor cost and availability in the United States remains a high hurdle for repatriating manufacturing work. And even a 100 percent American supply chain this year would have been vulnerable to interruption from domestic upheavals, such as the aftermath of an unusual cold snap in Texas, which disrupted petrochemical production, or wildfires that damaged railroad bridges.

“We are not seeing any dramatic move to reshoring because it has not really been distance that has been the issue during the pandemic,” said Soren Skou, CEO of Maersk, one of the world’s top cargo carriers and thus a principal beneficiary of global supply lines. “If you nearshore, and you put a factory in Mexico instead of China or you put a factory in Eastern Europe instead of China, that factory can still be hit just as easily in a pandemic scenario as if it’s based in China.”

Indeed, imports have grown faster than the U.S. economy since the start of 2019, reflecting a continued reliance on foreign sources of both industrial components and consumer goods. Through September, the United States imported nearly $2.1 trillion worth of goods, according to the Census Bureau, a product surge that helps explain the chronic congestion at ports, terminals and rail yards.

More goods are coming to the United States, and they are coming from more places.

Even before the pandemic, years of tariffs and geopolitical tensions had prompted many companies to diversify their goods and materials sourcing by adopting a “China-plus-one” strategy.

As a share of total imports, Chinese goods have fallen from almost 21 percent in 2019 to 17.5 percent through the first nine months of this year. Vietnam over the same period nearly doubled its share of U.S. imports. Countries such as India and Indonesia also grew in importance.

But there are no perfect defenses against supply interruptions.

When Vietnamese factories closed this summer to battle fresh coronavirus outbreaks, Deckers Outdoor, which relies on the Southeast Asian nation for a majority of its footwear output, was forced to scramble. The maker of UGG, Hoka and Teva brand footwear had just 10 percent of its production in the hardest hit southern region and shifted production to other factories that were still open.

But widespread supply bottlenecks meant that more than twice as much of the company’s inventory was in transit at the end of September, compared with a typical year.

To gird against future interruptions, Deckers has secured additional production space in “new geographic locations” and signed up new suppliers, Steven Fasching, the company’s chief financial officer, said in late October. The company also plans to carry more inventory to meet expected demand and as a hedge against inflation.

Spencer Shute, a supply chain consultant with Proxima in Boston, said he expects companies to emerge from the pandemic with a “hybrid” model, blending elements of traditional just-in-time operations with the more cautious and costly “just-in-case” approach.

“It’s an unrealistic goal to think there will never be any type of disruption to their supply chain,” Shute said. “What’s realistic is to be able to react quickly.” 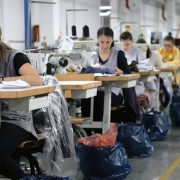 Fashion and shoe retailers relocating production to Balkans, Latin America to sites closer to their stores in U.S., Europe

Major clothing and shoe companies are moving production to countries closer to their U.S. and European stores, smarting from a resurgence in cases of the Delta variant of the novel coronavirus in Vietnam and China that slowed or shut down production for several weeks earlier this year.

The disclosures come amid a massive shipping logjam that is driving up costs and forcing companies to rethink their globe-spanning supply chains and low-cost manufacturing hubs in Asia..

The latest example is Spanish fashion retailer Mango, which told Reuters on Friday it has “accelerated” its process of increasing local production in countries such as Turkey, Morocco and Portugal. In 2019, the company largely sourced its products from China and Vietnam. Mango told Reuters that it would “considerably” expand the number of units manufactured locally in Europe in 2022.

Similarly, U.S. shoe retailer Steve Madden on Wednesday said it had pulled back production in Vietnam and had shifted 50% of its footwear production to Brazil and Mexico from China, while rubber clogs maker Crocs said last month it was moving production to countries including Indonesia and Bosnia.

Bulgaria, Ukraine, Romania, the Czech Republic, Morocco, and Turkey were some of the countries drawing new interest from clothing and shoe producers, though China continues to produce a large share of the apparel for U.S. and European clothing chains.

“We are seeing a lot of growth in freight and trucking activity in the former Soviet Republics… a big rise in Hungary and Romania,” said Barry Conlon, chief executive of Overhaul, a supply chain risk management firm.

In Turkey, apparel exports are expected to reach $20 billion this year, an all-time high, driven by a spike in orders from the European Union, Turkey’s Union of Chambers Clothing and Garment Council data showed. In 2020, exports hit $17 billion.

“Many companies from the European Union, which is our most important trading partner, are looking for new suppliers and new supply chains in the Balkan market,” said Professor Muris Pozderac, secretary of the association of textile, clothing, leather, and footwear in Bosnia & Herzegovina.

In Guatemala, where Nordstrom significantly shifted its private-label volume production in 2020, clothing exports were a touch over $1 billion as of the end of August, up 34.2% from 2020 and even 8.8% higher than in 2019.

To be sure, many companies are also still heavily reliant on Vietnam, where recent production stoppages have caused significant disruptions. Vietnam’s government said in October that it will fall short of its garment exports target this year, by $5 billion in a worst-case scenario, due to the impacts of coronavirus restrictions and a shortage of workers.