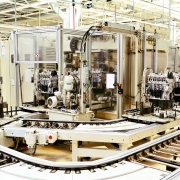 Among states, Baja California Sur was No. 1 with 269% growth.

Data from the National Institute of Statistics and Geography (Inegi) shows that Mexico’s overall manufacturing growth between 2013 and 2018 was 17.9% – 1.4% higher than that achieved in the previous six years. The increase in the value of nationwide production was largely driven by the Bajío, a region made up of Guanajuato, San Luis Potosí, Querétaro and Aguascalientes.

Western Mexico – Jalisco, Michoacán, Nayarit and Colima – achieved the second highest growth in the period, with the value of its production up 25.3%.

The northern border region – taking in all six states that abut the United States – was next with 21.5% growth, followed by the central-north region with 15.3% growth and central Mexico, which saw a 9.8% increase.

Among individual states, Baja California Sur was a clear-cut winner. The state saw whopping growth of 269% between 2013 and 2018.

San Luis Potosí was in second place with the value of its output increasing by 73.7%, while Aguascalientes recorded 70.4% growth to finish third.

The total value of manufacturing in Mexico last year was just over 7.3 trillion pesos (US $380.1 billion), with 32% of that figure coming from the northern border region. Factories in central Mexico generated 28.2% of the wealth and the Bajío region contributed 21.5%.

In 2013, the same three regions, in the same order, were also the leading contributors to the value of Mexico’s overall manufacturing output.

But 2018 figures show that only the Bajío increased its participation in percentage terms, contributing 4.3% more than it did in the first full year of Enrique Peña Nieto’s presidency.

The newspaper El Economista said that policies introduced by governments in Guanajuato, San Luis Potosí, Querétaro and Aguascalientes have been the driving force behind the Bajío region’s strong performance in manufacturing, pointing out that the states entered into commercial alliances that helped them to attract domestic and foreign investment in sectors such as automotive and electronics.

In November, the governors of the four states also agreed to work together to create a new manufacturing region to be known as the Central Bajío Corridor.

Long-term cooperation between the states will also extend to security, tourism, transport and social development, among other areas.

The Bajío region state that generates the most manufacturing wealth is Guanajuato.

Since 2010, it has ranked fourth every year for the value of its economic output behind México state, Nuevo León and Coahuila, which have maintained their spots, in that order, as Mexico’s top three manufacturing powerhouses for almost a decade.

San Luis Potosí and Querétaro are now also in the top 10 manufacturing states, taking the places of Sonora and Tamaulipas, which featured in the 2013 list.

The 7.3 trillion pesos generated by manufacturing last year accounted for 16.1% of gross domestic product (GDP), making the sector the most important of Mexico’s economy.

Production of cars and pickup trucks was the most profitable sub-sector of the manufacturing industry last year, generating 16.2% of all wealth followed by oil refining, which contributed 4.1%.

The production of buses and trucks was the third most profitable sub-sector, making a 4% contribution to the industry’s value.

Between 2013 and 2018, the value of parts manufactured for vehicle transmission systems increased by 101.7%, making it the best performing sub-sector in terms of growth, followed by beer production, which surged 73.5% and car and pickup truck production which grew by 68.1%.

Petroleum refining and the production of pharmaceuticals and tortillas were among the manufacturing sub-sectors whose contribution to total manufacturing value fell while Peña Nieto was in power.