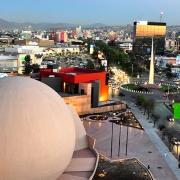 Easy movement across the border to and from San Diego is key to Tijuana’s tech outsourcing attractiveness.

Situated just 18 miles from San Diego across one of the busiest land borders in the world, Tijuana has long been building its reputation as an attractive outsourcing destination. Almost 2.1 million people live in Mexico’s sixth-largest city, many of whom are U.S citizens. Many more cross the border daily for work and collaboration between the two cities has been core to transnational development. This easy movement is one of the key drivers for tech growth in the city and broader region.

Lonnie McRorey, Co-Founder and CTO of Framework Science, believes that the outlook for the tech sector in Tijuana is one of exponential growth – unless the current U.S administration makes it more difficult for US citizens to live in Tijuana and for Tijuanans to go to work in San Diego every day. “Border politics is a double-edged sword in my opinion,” McRorey says.

Mexico-US relations have been under pressure as continued rhetoric from the Tump administration has focused on the building of a border wall, to be paid for by Mexico – something the Mexican government has consistently reiterated it will not do. Opponents have challenged the President’s assertions.

Following his State of the Union address on February 5, El Paso, Texas mayor Dee Margo, a Republican, wrote in a column for USA Today: “We in El Paso, Texas, are a community that transcends the border. While some are concerned about our proximity to Mexico, we choose to celebrate it. While others embrace building a wall, we remind them a fence already exists.”

Similarly Andrea Guerrero, executive director of the community group Alliance San Diego, told the Guardian in December 2018 that “Tijuana and San Diego are one community, with one heart.” This transnational spirit remains strong in places along the border.

Despite this uncertainty, Tijuana remains poised for growth in the tech sector. Adriana Eguia Alaniz, Vice President of New Business at Vesta Industrial Real Estate, agrees, describing Tijauna’s tech developments as “a growing sector with a lot of potential for success.” Eguia is the former CEO of the Tijuana Economic Development Corporation and former Executive Director of the Cali Baja Bi-National Mega-Region.

More than 15 Los Angeles and San Diego start-ups have joined Framework Science as a result of the binational network. “It’s amazing how quickly San Francisco companies can get down to San Diego and cross the border to take an Uber to their site operations. Tijuana is basically South South San Diego,” McRorey says.

Sounding the Call for Tijuana Investment

Known initially for manufacturing and now for IT companies outsourcing their call center operations there, there are now a growing number of companies in Tijuana that are focusing on coding. Initiatives to draw companies in software, robotics and AI have sprung up, and, according to the San Diego Regional EDC, the rise of the innovation cluster and creation of incubators and new co-working spaces such as BitCenter and MindHub “foster the entrepreneurial spirit of locals.”

High-tech companies are now looking to Tijuana as an attractive option. “Gaming companies, high-tech medical device companies and so on, are now based in Tijuana and are looking to grow in this city with a lot of potential,” says Eguia.

However, Tijuana needs to ensure that its benefits are visible to the world. “There’s more to be done regarding positioning. People don’t know all the things that can be done here. Even though talent is available, companies are also bringing people from the South of Mexico that sometimes makes for a slower recruitment process. There’s no tech visa for Mexico, but the legislative process is running for Mexico to give the news for 2019,” says Eguia.

McRorey adds: “Mexico also boasts the highest numbers of STEM graduates across the American continent! Tijuana’s culture is binational by default, making it a hot spot for investments. Right now the real estate business and construction is booming.”

He explains that Tijuana is poised to be at the epicenter of transitional change as prime-country-city for cost-effective design/manufacturing and digital enterprise development outsourcing. “US companies are eyeing Mexico because of NAFTA and what it means for IP rights, and for the extreme proximity to the U.S,” he says, adding that Tijuana’s bi-cultural workforce makes it preferable to countries in Asia, for example.

The Need for Trusted Partners

He adds that Tijuana is primed for all types of outsourcing needs, from assembly and manufacturing to full product R&D. “Talent is drawn from Mexicali, Ensenada and Tecate thus the wide geographical dispersion makes it the ideal city for this type of boom in the next 10 years,” McRorey says. Mexico’s president’s agenda of lowering taxes and gasoline costs across the border with the US greatly incentivizes investments and business operational outsourcing opportunities.

Both agree that capitalizing on Tijuana’s attractiveness requires local knowledge and a good partner. “You need a trusted partner on the ground that can navigate business infrastructure and people operations. It is best to move to Tijuana for a few weeks or months to build a network,” McRorey says.

Eguia adds that you will need to be helped by an ecosystem expert or you can get lost to companies that may be not quality oriented. “There is also a lack of information if searching on the internet,” she cautions.