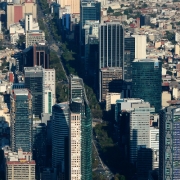 There’s a reason China has been named “the world’s factory”. According to data published by the United Nations Statistics Division, China accounted for almost 30 percent of global manufacturing output in 2018.

China earned this status in a relatively short space of time. According to The Economist, in 1990, China produced less than 3 percent of global manufacturing output. It first overtook the US, previously the world’s manufacturing superpower, in 2010.

But the US-China trade war has prompted many companies to re-examine global supply chains. A recent study by the McKinsey Global Institute estimates that companies could shift a quarter of their global product sourcing to new countries in the next five years. Climate risks, cyber attacks and the ongoing pandemic are only accelerating this trend. In this uncertain trade environment, a growing number of countries are hopeful that they could replace China as the world’s next major manufacturing hub.

Vietnam
So far, Vietnam has been one of the main beneficiaries of the US-China trade war, absorbing much of the manufacturing capacity that China lost. As well as cheap labour and stable politics, the country boasts increasingly liberalised trade and investment policies that make it an attractive place for businesses looking to diversify out of China.

Some of the biggest names in tech have relocated some of their operations to Vietnam since tensions between the two powers soured. In early May 2020, Apple announced it would produce roughly 30 percent of its AirPods for the second quarter in Vietnam instead of China.

Mexico
A lesser-known beneficiary of the trade war is Mexico. In a report, the investment bank Nomura pointed out that Mexico could become a top destination for US companies, with the country having set up six new factories in a range of sectors between April 2018 and August 2019. In addition, Taiwan-based manufacturers Foxconn and Pegatron, known as contractors for Apple, are among a number of companies currently considering shifting their operations to Mexico.

Mexico’s proximity to the US poses a major advantage as US companies embrace “near-shoring”. The Trump administration is exploring financial incentives to encourage firms to move production facilities from Asia to the US, Latin America and the Caribbean.

India
In recent years, India has significantly stepped up efforts to attract manufacturing investments into the country. Prime Minister Narendra Modi’s “Made in India” initiative is designed to help the country replace China as a global manufacturing hub. A cornerstone of this plan involves encouraging the world’s biggest smartphone brands to make their products in India. In June of this year, the country launched a $6.6bn incentive programme to boost electronics manufacturing production in the country.

So far however, the country has seen only modest gains from the trade war. Analysts blame India’s stringent regulatory environment; on the Organisation for Economic Development’s FDI Regulatory Restrictiveness Index, India ranks 62nd out of 70 countries.

Malaysia
Between 2018 and 2019, the Malaysian island of Penang saw a surge in foreign investment. Much of this came from the US, which spent $5.9bn in Malaysia in the first nine months of 2019, up from $889m the year before, according to the Malaysian Investment Development Authority. US chip maker Micron Technology announced it would spend RM1.5bn ($364.5m) over five years on a new drive assembly and test facility.

However, the loss of trade from China has hit Malaysia hard. Many tech firms in Penang rely on China for as much as 60 percent of their components and materials.

However, the trade war and the coronavirus pandemic could change this. As a trade hub with liberal trade and investment policies and a history of stable economic growth, Singapore is well-positioned to boost its manufacturing capabilities and capitalise on this opportunity.

However, like Malaysia, Singapore is also struggling with the knock-on effects of decreased demand from China. The export-dependent country has seen its manufacturing output slump as a result of the trade war – a sign that the country could benefit from greater independence from China.

Among states, Baja California Sur was No. 1 with 269% growth.

Data from the National Institute of Statistics and Geography (Inegi) shows that Mexico’s overall manufacturing growth between 2013 and 2018 was 17.9% – 1.4% higher than that achieved in the previous six years. The increase in the value of nationwide production was largely driven by the Bajío, a region made up of Guanajuato, San Luis Potosí, Querétaro and Aguascalientes.

Western Mexico – Jalisco, Michoacán, Nayarit and Colima – achieved the second highest growth in the period, with the value of its production up 25.3%.

The northern border region – taking in all six states that abut the United States – was next with 21.5% growth, followed by the central-north region with 15.3% growth and central Mexico, which saw a 9.8% increase.

Among individual states, Baja California Sur was a clear-cut winner. The state saw whopping growth of 269% between 2013 and 2018.

San Luis Potosí was in second place with the value of its output increasing by 73.7%, while Aguascalientes recorded 70.4% growth to finish third.

The total value of manufacturing in Mexico last year was just over 7.3 trillion pesos (US $380.1 billion), with 32% of that figure coming from the northern border region. Factories in central Mexico generated 28.2% of the wealth and the Bajío region contributed 21.5%.

In 2013, the same three regions, in the same order, were also the leading contributors to the value of Mexico’s overall manufacturing output.

But 2018 figures show that only the Bajío increased its participation in percentage terms, contributing 4.3% more than it did in the first full year of Enrique Peña Nieto’s presidency.

The newspaper El Economista said that policies introduced by governments in Guanajuato, San Luis Potosí, Querétaro and Aguascalientes have been the driving force behind the Bajío region’s strong performance in manufacturing, pointing out that the states entered into commercial alliances that helped them to attract domestic and foreign investment in sectors such as automotive and electronics.

In November, the governors of the four states also agreed to work together to create a new manufacturing region to be known as the Central Bajío Corridor.

Long-term cooperation between the states will also extend to security, tourism, transport and social development, among other areas.

The Bajío region state that generates the most manufacturing wealth is Guanajuato.

Since 2010, it has ranked fourth every year for the value of its economic output behind México state, Nuevo León and Coahuila, which have maintained their spots, in that order, as Mexico’s top three manufacturing powerhouses for almost a decade.

San Luis Potosí and Querétaro are now also in the top 10 manufacturing states, taking the places of Sonora and Tamaulipas, which featured in the 2013 list.

The 7.3 trillion pesos generated by manufacturing last year accounted for 16.1% of gross domestic product (GDP), making the sector the most important of Mexico’s economy.

Production of cars and pickup trucks was the most profitable sub-sector of the manufacturing industry last year, generating 16.2% of all wealth followed by oil refining, which contributed 4.1%.

The production of buses and trucks was the third most profitable sub-sector, making a 4% contribution to the industry’s value.

Between 2013 and 2018, the value of parts manufactured for vehicle transmission systems increased by 101.7%, making it the best performing sub-sector in terms of growth, followed by beer production, which surged 73.5% and car and pickup truck production which grew by 68.1%.

Petroleum refining and the production of pharmaceuticals and tortillas were among the manufacturing sub-sectors whose contribution to total manufacturing value fell while Peña Nieto was in power.