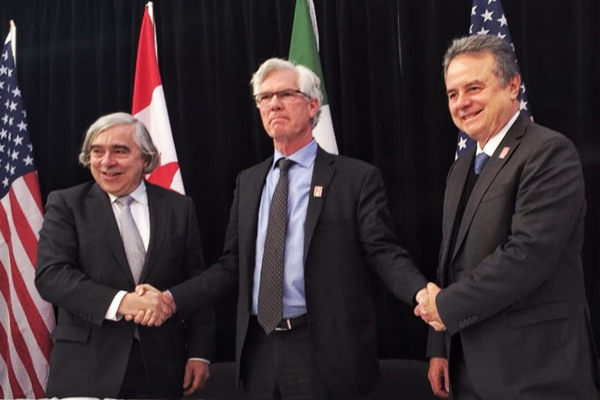 Mexico, Canada and the US have signed a memorandum of understanding for energy and climate change cooperation, aimed at harmonizing the three countries’ policies and promoting green strategies.

The three countries announced last week that they are moving toward energy integration during Mexican energy minister Pedro Joaquín Coldwell’s visit to Winnipeg.

Coldwell said that among the three nations’ common aims is to offer clean electricity at competitive prices based on a lasting infrastructure, and highlighted Mexico’s commitment toward the three countries’ energy integration.

The meeting between the three ministers resulted in agreements to work toward increased electric power grid efficiency, use of green technology and the commitment to create common regulations to control CO2 emissions.

Mexico’s energy reform promotes the use of renewable energy sources and the first long-term power auction, to be held on March 31, will allow for the generation of cleaner, cheaper electricity, Coldwell said.

“In Mexico we are promoting investment in gas pipelines and combined cycle power plants with cutting-edge technology,” he said.

He also referred to Mexico’s auction of shallow water, onshore and deepwater oil fields, the latter of which is to be held in October, bringing private investment to the oil and gas sector.

Of the foreign firms that have so far been awarded contracts in the oil and gas auctions, five are from the US and one is Canadian, he said.

Mexico is also expanding its electricity connection with the US and moving forward with natural gas pipeline connections with its northern neighbor, he added.

Coldwell said the MOU incorporates previous agreements between the three countries, as well as commitments assumed at the COP21 climate talks in Paris.